Providing busy teachers with engaging and easy to implement lessons they can use to inspire a love of social studies in their students.

Earlier I wrote about two specific ways I have used primary sources in my classroom. If you didn’t read that blog post, I highly suggest you hop on over to check it out (there *might* be a freebie in that post!). In this blog post, I want to share how you can incorporate political cartoons in your classroom. If you missed my posts on how to use stations, simulations, interactive notebooks, and social studies escape rooms, and are serious about adding new teaching strategies to your toolbox, you will want to read them! 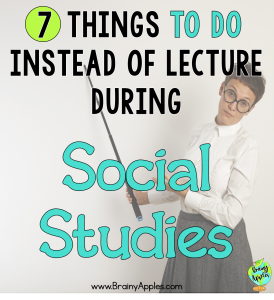 WHAT ARE POLITICAL CARTOONS?

Political cartoons are also known as editorial cartoons. They are illustrations or comic strips that contain either a political or social message. The artist uses specific devices to convey his/her message (we will take a closer look at these devices below). 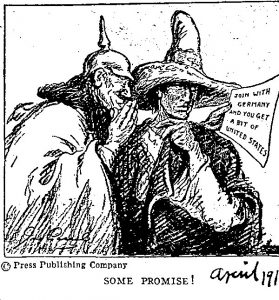 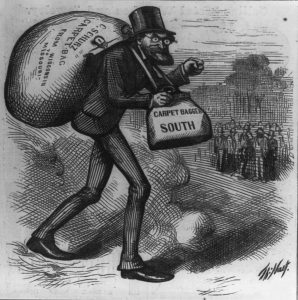 WHY ARE POLITICAL CARTOONS CREATED?

In the 18th and 19th centuries, political cartoons were primarily used to communicate specific messages to people who could not read. People could use the visual clues in the illustration to understand what the artist is saying. Some political cartoons do use text, and it is very important to pay attention to any text within the cartoon because it will help the viewer better understand the intended message. Political cartoons are biased, representing the artist’s opinion, and they can contain propaganda. Propaganda is the use of information (often biased or sometimes even misleading) to promote or publicize a political or social cause or point of view.

*Symbolism– simple pictures that are used to represent ideas or groups

*Stereotypes– a generalization (that is usually exaggerated, oversimplified, and/or offensive) that is used to describe a group

example: someone says during a thunderstorm “What nice weather we are having!”

example: putting a politician next to a dollar sign

*Labels and captions– text used for emphasis and clarity

WHY INCLUDE Social Studies POLITICAL CARTOONS IN THE CLASSROOM?

Using social studies political cartoons in the classroom can greatly enhance a student’s learning and understanding of specific topics. They can also help students construct their own meaning. Political cartoons are primary documents that reflect a given time period. By analyzing political cartoons, students will have to look beyond the cartoon and think about the events that occurred during that time in history, which will help students make connections between events. 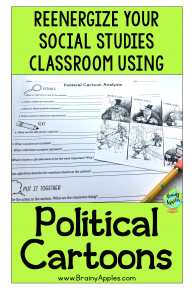 Political cartoons can be difficult for students to understand, so it’s very important to make sure they have adequate background knowledge. If you want students to be detectives, using the clues to construct their own meaning, then you don’t want to give too much away. However, students do need to have some kind of background information.

When I first begin using social studies political cartoons in my classroom, I always start with a sorting activity using regular comics (you can find lots of them by googling “comic strips”) and a mix of political cartoons from the past and present. I use present-day political cartoons because students will most likely have the background knowledge needed to understand that these are somehow different from the normal comics. I also include political cartoons that are about sports because I know for sure many of my students will be able to make connections. Here is one of Peyton Manning as an example. Once I have a small assortment of comics and political cartoons, I make sets of them. I split my students into groups of 4-5, so I make however many sets I need. Typically I make 7-8 sets. I place these in a manilla envelope and pass one out to each group. The only direction I give my students is that they need to organize the illustrations into categories. It’s up to them how many categories they use. Once they have their illustrations groups, I have them name each category. I have had students make categories of “sports,” “animals,” “silly,” “serious,” “famous people,” and many more. I give about 10 minutes for their first categorization.  I also have groups share some of their categories. This helps other groups see how differently the comics can be sorted. Then I tell students they have to get rid of 1-2 categories, so they need to reorganize them. I give about 5 minutes for this round, and, again, I have groups share their categories. I do one last round, telling students they need to have no more than 3 categories (and if a group already had 3 or fewer, I tell them they need to reorganize into different categories…unless they have already included political cartoons as a category). I give 5 minutes, and then groups share again. It’s very interesting to see how students organize the comics, as well as their conversations behind their reasoning. I almost always have one group that includes some type of political cartoon category, although they may not call it that. I try not to tell students there are political cartoons because I want them to really look at the comics to see the difference between the normal comics and the political cartoons. 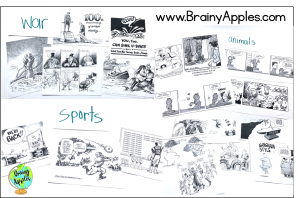 If students still have not realized the difference, I do a “Yes/No” concept attainment activity. I will hold up one comic and say that it is either a “yes” or “no.” I do this for about 6 of them, then I ask students to tell me if the next comic I hold up is a “yes” or “no” based on the previous comics. This will help students categorize the political cartoons.

***I wish I could share a download PDF of the cartoons I use, but most of the normal comic strips are copyrighted***

Analyze a political cartoon about a familiar issue (day 2)

Once students have analyzed a political cartoon about a current event, I then give them a political cartoon about an issue related to a unit of study we are currently on or have finished. I let students work in groups, analyzing the political cartoon, and they fill out one analysis page. I make sure I circulate through the room, listening in on discussions, giving advice or tips when needed (just because they ask doesn’t mean I help. I do believe in letting them struggle on their own). I still have the example we did together the day before posted, so students can refer back to it if needed. The last 10 minutes of class is reserved for groups to share their analysis. I believe students can learn just as much (if not more sometimes) from each other than me, so I want students to listen to each others’ reasoning and rationale (especially about political cartoons).

On day 4, I have students analyze a political cartoon on their own, filling out their own analysis page. Students who I know will still have difficulty are paired with a partner on the same level, so they are working through it together, and not just one working while the other one sits. Students need adequate time to practice analyzing political cartoons because they can be very difficult to understand. I have found that spending about a week on how to analyze political cartoons enables me to spend the entire year incorporating them into as many lessons as possible, which leads to more in-depth understanding of those topics. Remember, a little leg work at the beginning will set your students up for smooth sailing the rest of the year! 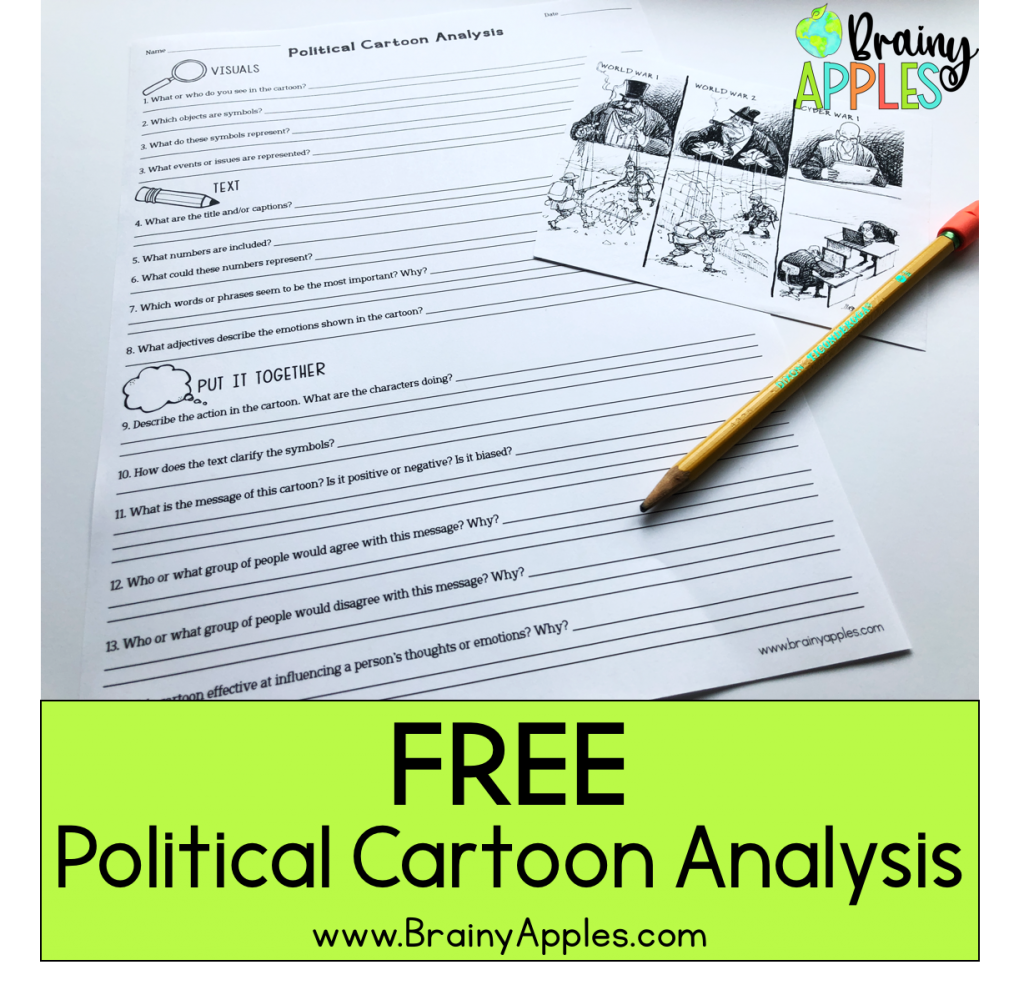 Don’t forget to download the FREE political cartoon analysis page! You can either have students fill it out, or you can use the questions as a discussion guide.

I would love to hear about your experience using political cartoons in your classroom in the comment section below!

We use cookies on our website to give you the most relevant experience by remembering your preferences and repeat visits. By clicking “Accept All”, you consent to the use of ALL the cookies. However, you may visit "Cookie Settings" to provide a controlled consent.View Terms and Conditions
Cookie SettingsAccept All
Manage consent

This website uses cookies to improve your experience while you navigate through the website. Out of these, the cookies that are categorized as necessary are stored on your browser as they are essential for the working of basic functionalities of the website. We also use third-party cookies that help us analyze and understand how you use this website. These cookies will be stored in your browser only with your consent. You also have the option to opt-out of these cookies. But opting out of some of these cookies may affect your browsing experience.
Necessary Always Enabled
Necessary cookies are absolutely essential for the website to function properly. These cookies ensure basic functionalities and security features of the website, anonymously.
Functional
Functional cookies help to perform certain functionalities like sharing the content of the website on social media platforms, collect feedbacks, and other third-party features.
Performance
Performance cookies are used to understand and analyze the key performance indexes of the website which helps in delivering a better user experience for the visitors.
Analytics
Analytical cookies are used to understand how visitors interact with the website. These cookies help provide information on metrics the number of visitors, bounce rate, traffic source, etc.
Advertisement
Advertisement cookies are used to provide visitors with relevant ads and marketing campaigns. These cookies track visitors across websites and collect information to provide customized ads.
Others
Other uncategorized cookies are those that are being analyzed and have not been classified into a category as yet.
SAVE & ACCEPT